Year 1 have been exploring halves, quarters and wholes for the past three weeks.

Half is one of two equal parts of an object, shape, or amount, while a quarter is one of four equal portions.

This week, Lion and Panther class collaborated to measure and compare various volumes using the benchmarks of a half, a quarter, and a whole. It was wonderful to hear the children talking so confidently using mathematical vocabulary. 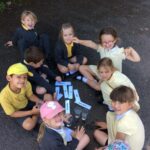 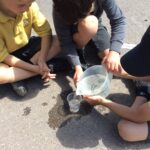 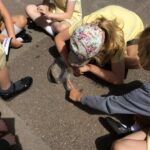 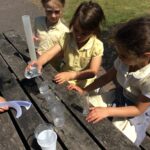 Then we compared length using ½  and  ¼ and whole as a benchmark. We played a mini game called ‘shove a penny’. We began by creating our  ‘tape measure’ marking ½m ,  ¼m and 1 meter. Then the fun began! In pairs we flipped a coin next to the tape measure. Using key vocabulary we described how far along the coin was. For instance ‘My coin landed nearly a quarter of the length’. 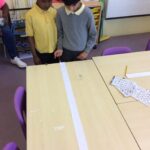 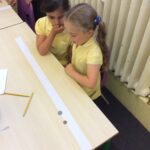 Play the game ‘shove a penny’ with your friends and family at home. Begin by making your own tape measure, marking out half and quarter. Let the games commence! Using your mathematical vocabulary: ½m ,  ¼m, 1 meter, equal to, less than and more than to describe the position of your coin.