This week in Nursery – Patterns

This week we have been looking at our own adventures based on the Magic Porridge Pot. After working on the story together we went off and invented our own story based on the text. Some children decided to find some magic shoes that could fly them to wherever they wanted to go; some chose a magic wand for their stories that could turn anything into sweets and there were lots of stories about a magical hot chocolate pot with multicoloured marshmallows! Some of us have recorded our stories or written a story map with a friend and then retold the story to the whole class. We loved to see their imaginations shining through!

We are learning to “Retell the story, once they have developed a deep familiarity with the text, some as exact repetition and some in their own words.”  “Articulate their ideas and thoughts in well-formed sentences.” and “Listen to and talk about stories to build familiarity and understanding.” (Development Matters 2021)

We have been very creative with our spiderwebs  – trying to free pompoms and pasta with our tweezers from the sticky web to match the number at each corner of the table! We have also made a giant spider web on the wall  and decorated it with some homemade spiders and the number 8  (for its 8 legs!) and S’s for (spider!). We also got the paint out and made some autumn trees that had lost their leaves. 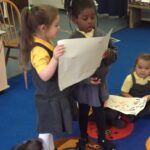 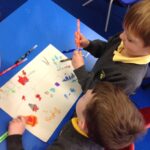 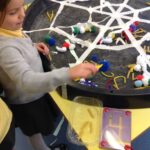 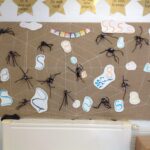 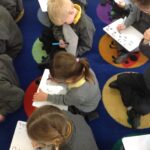 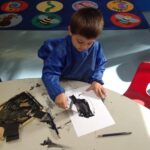 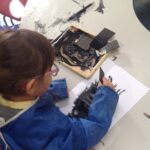 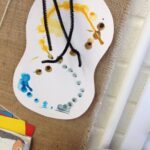 Sound of the week

We are learning to ,”read individual letters by saying the sounds for them” and “develop the foundations of a handwriting style which is fast accurate and efficient” (Development Matters 2021).

This week we have been practising our ‘ck’, ‘e’, ‘u’ and ‘r’  sounds as well as revising last week’s letters. We have been looking at how to write the letters that go with each sound. We have been using chalk outside and inside we have decorated letters with hats, teeth and mini letters! We have also had a treasure hunt around our outdoor space to spy the picture and words relating to a certain sound. 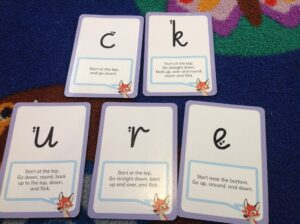 If you would like to practice the letter shapes at home you could use play-dough (recipe is below if you would like to make it at home) and see if you could roll out the play-dough into a sausage first and then make one of the letters with it. Another activity would be to draw the letter on a piece of paper and using different colours your child could copy the letter and add details such as eyes, a tail – we even had an ‘itchy wig’ and ‘three eyes’ added to the letter ‘e’ when we did this in class!

Mix the flour and salt together in a bowl. Add the water, oil (and food colouring/essence if using) mix to combine, and store in the refrigerator. Enjoy!

Have a wonderful Half term,